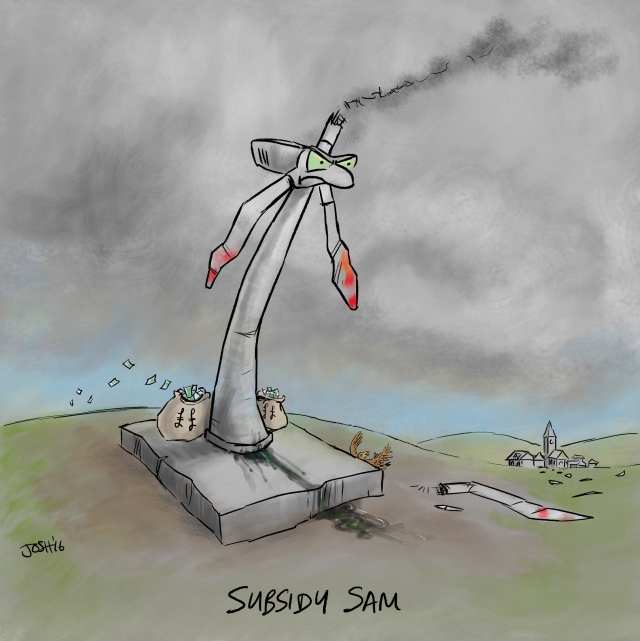 The children’s Story that tells the truth about the turbines in contrast to the wind industry’s Tommy, the Turbine.

Subsidy Sam was big, one of the biggest turbines you could get.

He had spent the last year, since being built, dominating the village and bearing down on the local school, its pupils and staff.  Sometimes you could even see him flailing his arms about but a lot of the time he didn’t.  He was huge.  So big he could be seen for miles and miles.  Much further than the land owner, Lord Grabbit, a filthy rich coal mining baron, had said you would be able to.  He, with the developers Green Scam Renewables, had even shown pictures to the worried villagers of what Subsidy Sam would look like but it was really hard to see him in the misty distance in the developer’s photomontages.

But today Subsidy Sam was furious.  One of his arms had blown off and jagged bits of it were spread all over the school playground.  It was so windy.  Perhaps even a Force 9 gale.  Sam had been waiting for Green Scam Renewables to switch him off before he disintegrated but they had been waiting for the National Grid to ask them to switch him off first, so that they could claim the extravagant constraint payments to not generate.

Green Scam Renewables had misjudged it today and now Subsidy Sam stood broken with one arm missing and the other two hanging forlornly at his side.

It was a good job it wasn’t break time when the children would have been outside playing. With no enforced safety zone around this huge piece of industrial machinery and its whirling blades, it was very dangerous to be anywhere near him but no-one was telling the children that.  Subsidy Sam was their friend and would help save the world.  The nice wind developer man who owned Green Scam Renewables, Mr McWeasel, had told them that.  He had come to the school with the jolly round man from the government who was wearing a tie with turbines all over it.  They told the children that Subsidy Sam would save them and had frightened them all into thinking without him they were all doomed and the planet would die and so would they.

It was scary stuff.  It gave them nightmares.

The French Head Mistress, Madame de Gaulle, was pleased to see Sam’s blade fly pass her study window at such speed and smash into a thousand pieces.  She was relieved that none of the children had been hurt but she was glad to see the broken turbine.  ‘Good riddance’ she thought.  She knew a waste of money when she saw it.  She hated Subsidy Sam, or SS as she preferred to call him, and had put up strong resistance to him being built but to no avail.  It made no difference that she objected when they pretended Sam was a community turbine.  No-one in the community wanted Sam but deceiving the local authority into thinking he was one was the only way they would be allowed to build him. She’d heard of burly men going round the village telling people not to object or else.

People were frightened so they didn’t.

Now when the sun shone she had to close the blinds in her study to stop the strobing from Sam’s blades hitting her desk and giving her throbbing headaches.

The compensation that was offered to the community by Green Scam Renewables was offensive.  How can they pay anyone enough to make up for not being able to sleep at nights because of the incessant thumping when Sam was having a party and waving his arms in the air?

Nothing could make up for that.

Even the people who want to sell up and move away can’t because when the potential buyers see Subsidy Sam they don’t even get out of their cars.  They just speed away without a backward glance.

The tourists have stopped coming.  They see Sam and ask,  ‘Why did you build that huge ugly thing near your pretty village?  We won’t stay here.  We will spend our money in places we like the look of and that’s not here.’

Once the foreign workers who built Subsidy Sam had left, the B&Bs and guest houses stayed empty, many people lost their jobs in the tourism industry because no-one came to visit any more.

The birds were happy to see Subsidy Sam immobilised because it meant they no longer had to take their lives in their wings to feed at the nature class bird table every time they passed him when he was having one of his Edward Scissorhands on acid moments.

The caretaker was pleased because he wouldn’t have to keep sweeping up all their feathers and body bits when they misjudged it.  However, all the oil that was leaking down Subsidy Sam’s leg and seeping across the playground was hard to scrub off.

The caretaker could never understand how a wind turbine so full of fossil fuels could ever be classed as clean and green.

Still, the oil was a greenish black colour – perhaps that is what people meant.  He was just a simple caretaker on minimum wage struggling to pay his energy bill with all these ‘green’ levies on them.  What did he know?

He had wanted to object to Subsidy Sam being built but he lived in a cottage on Lord Grabbit’s estate.  It had been suggested to him that he shouldn’t object in case his home became no longer available to rent.  Without his little cottage he wouldn’t have anywhere to live near where he worked, so he didn’t object.

Mr McWeasel wasn’t pleased because since Subsidy Sam’s arm had been liberated he was unable to get the juicy subsidy for any energy the turbine might have managed to produce or the very lucrative constraint payments.  He got those when he was told to switch Subsidy Sam off when there was low demand for electricity, too much wind and the grid was in danger of being overloaded and plunging everyone into darkness.

Why should he care that Subsidy Sam was intermittent and unreliable and didn’t give any energy security?  He got paid whatever.

Mrs McWeasel wouldn’t be pleased either as she was expecting her usual two months holiday in the Bahamas, new top of the range set of wheels and that stunning diamond necklace she had set her heart on.

Mr McWeasel would have a lot of explaining to do when he got home.  After all he had guaranteed his lovely young wife a life of riches and leisure all paid for by the spoils from Subsidy Sam.  It was no matter to him that fuel poverty had increased because the supplements to pay Sam’s subsidies had been added to the energy bills of everyone, even the poor, the elderly and the sick.

No matter to him either that the children and staff were in danger every day from Subsidy Sam’s flying components, that the birds were being sliced and diced, the bats were exploding, the leaking oil was polluting the school yard or that the lights were frequently going out so that the caretaker had to crank up the polluting diesel generator.  None of that concerned Mr McWeasel or the politicians he had hoodwinked into believing his windy propaganda.  They were so stupid even Mr McWeasel couldn’t believe he had got away with the wind con for so long.

Still, that looked like it had all come to an untimely end with Subsidy Sam now broken and useless.  No more subsidies available for new Sams because that pesky government over the border had stopped filling the subsidy trough.

‘Ah well,’ sighed Mr McWeasel.  It was time to move onto other things.  He had heard that there were good returns and subsidies operating banks of noisy toxic fume-belching diesel generators now.  All needed because the politicians had over-deployed on the weather-dependent subsidy suckers and under-deployed on reliable generation.  He would need to speak to Lord Grabbit and see if he could build them where Sam was, near the school.

Mrs McWeasel would still get her holiday, her new car and her diamonds.  Mr McWeasel might even treat himself to that yacht he had always wanted as well.

Saving the planet was no longer a priority – was it ever, Mr McWeasel?

Slightly mad. Always believes a cup is half full so continues to tilt at Wind Turbines and the politicians that seem to believe it is their god given right to ruin Scotland for a pot of fool's gold.
View all posts by Dougal Quixote →
This entry was posted in Wind farms. Bookmark the permalink.

2 Responses to Subsidy Sam, The Turbine